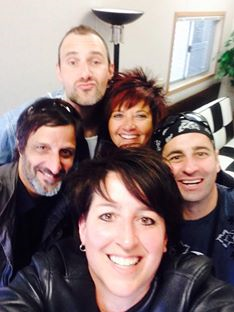 The Ronnie Nyles Band, is an award winning 5 piece band that rocks out the classics of Led Zeppelin, Pat Benatar and Ozzy, just to name a few and then turns on a dime kicking out today's top 40. And it doesn't stop there! Along with their extensive cover material Ronnie and the Band offers up their own original music that is creating an exciting stir in the music industry with their greatly anticipated CD. Wearing their creative passion on their sleeve, The Ronnie Nyles Band flexes it's music muscle with every high energy show they perform. These extremely talented musicians bring to the stage their own unique personalities and musical background that will capture the rock and roll in you.

​​Along with headlining Festivals, Fairs and Fundraiser's throughout the midwest Ronnie & The Ronnie Nyles Band have also performed with such national artists as Melissa Etheridge, Joan Jett & The Black Hearts, Lucinda Williams, The Indigo Girls, Night Ranger, Kansas, Death Cab For Cutie, Daryl Struermer (Phil Collins guitarist), Cheap Trick ... and many more. Ronnie & The Ronnie Nyles Band has also performed for special events and organizations such as Harley Davidson, The Green Bay Packers, The Milwaukee Bucks ... just to name a few.